Energy advisory, testing and certification company DNV GL (including KEMA) will today begin construction on its extension of the High-Power Laboratory in Arnhem, the Netherlands. 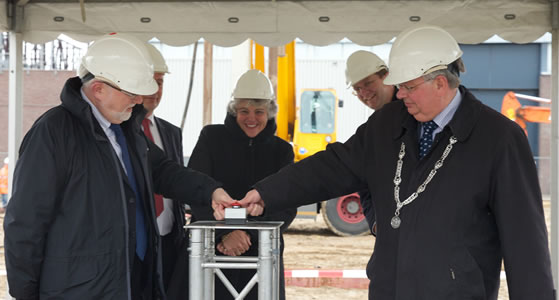 Mayor of Arnhem Herman Kaiser and David Walker, CEO of DNV GL – Energy, will together press the red button to officially launch the construction phase of the EUR 70 million project to expand DNV GL’s existing High-Power Laboratory facilities. The expansion will create the world's first lab in the extreme testing segment for the emerging market for super grids capable of bulk energy transport at 800 kV+ (800,000 Volts and above). DNV GL expects to perform the first tests at the expanded lab in 2016.

Under the expansion programme, DNV GL is increasing the number of short-circuit generators at the High-Power Laboratory from four to six, extending the available testing power to 15 GW. This is about two-thirds of the current installed electricity generating capacity of the Netherlands.

Rise of super grids
Global demand for electricity is growing rapidly. This growth will translate into a strong increase in investments in electricity transmission and distribution (T&D) infrastructure. In particular, the development of super grids will be crucial, enabling transnational and transcontinental transmission networks that facilitate the high-volume transport of electricity across great distances. With renewable energy sources typically located away from population centres, super grids also facilitate the integration of large-scale renewable energy. Super grids are already being developed in some countries, for instance, the long-distance, ultra-high-voltage connections between hydropower stations in western China and east-coast load centres such as Beijing and Shanghai. Other examples can be found in Canada and India, while a possible connection between continental Europe and large-scale solar farms in Africa's Sahara Desert has been mooted.

Safety and reliability
The growth of high-voltage power networks around the world will drive proliferation of new high-voltage T&D components, such as circuit breakers and power transformers, and new component manufacturers. Before installing these new components in the power network, utilities must be confident they are reliable and function correctly to minimise the risk of economically, socially and technically disastrous outages. This in turn requires more flexible testing facilities offering a wider range of tests and higher power levels – facilities like the expanded KEMA High-Power Laboratory.
The expansion of the High-Power Laboratory in Arnhem is specifically designed to support the electricity transmission and distribution (T&D) industry as it transitions to higher transport voltages and so-called super grids. When the expansion finishes in end of 2015, the High-Power Laboratory will be the only facility in the world capable of extreme high-power short-circuit testing at 800 kV levels and above. This will give DNV GL a solid platform to grow in an unpopulated market where the entrance barriers are very high.